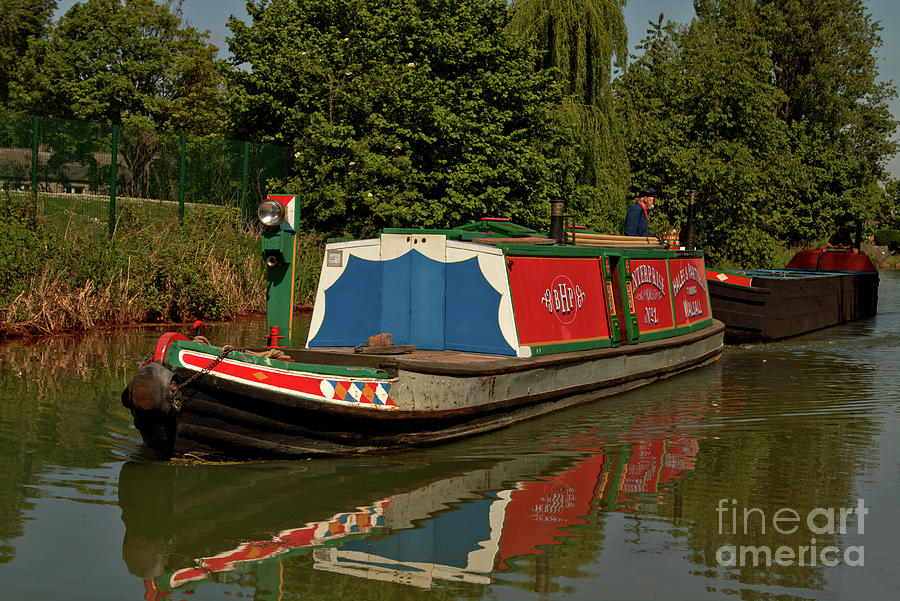 Originally named COUNT, ENTERPRISE was built by Fellows, Morton & Clayton on their dock at Saltley, Birmingham, for their own use. The composite hull (iron sides and elm bottom) was fitted with a Haines Patent engine supplied with steam from a coke fired Danks boiler. In 1925, Fellows, Morton & Clayton converted her to a motor boat using a fifteen horse power Bolinder semi-diesel engine. She carried general cargoes until she was damaged by an incendiary bomb at Fazeley Street Depot, Birmingham during the Second World War.
Following the war, Ernest Thomas was called in to salvage a number of vessels of this type. As well as being in the scrap business, he was one of the main "Black Country" canal hauliers and saw the potential in this shapely hull for a powerful and manoeuvrable tug. After reconstruction, ENTERPRISE retained her original bow and stern, but her power was increased by a massive 35 inch in diameter and 25 inch pitch propeller. Power for the tug was provided by a Gardner five cylinder L2 diesel engine originally supplied in 1931 to Walker's of Wigan and fitted to their prototype Pagefield Paladin seven ton lorry. It was obtained from a breaker's yard at Shoreham-by-Sea and reconditioned by Sam Satterthwaite at Streetly Garages Ltd. A Parsons HRG forward/reverse box with 2:1 reduction, supplied new to Leonard Leigh in 1939, was also fitted. On commissioning for Ernest Thomas, the test load was ten laden wharf boats – known as hamptons; a payload of four hundred tons, but for safety when working, trains were limited to six. Most of the tug's working life until the early 1960s was spent moving coal from the Cannock, Holly Bank and Hatherton collieries to Birchills Power Station, Walsall.

ENTERPRISE was number one of fourteen tugs run by "Ernie", who had over four hundred boats at the peak of the trade. By the late 1950s, Birchills power station began to receive supplies by rail and ENTERPRISE was laid up for increasing periods. She was virtually untouched for about ten years until 1973, when Ernest Thomas disposed of some of his notable boats including the tugs ENTERPRISE NO. 1 and BIRCHILLS NO. 2.
BIRCHILLS was built by Ernest Thomas on his dock at the top of Walsall locks, to the traditional design of a day boat/joey. She was registered on 23 June 1954 at Tipton and worked on the run to Birchills Power Station. When the power station closed, she was sent to Hatherton Junction on the Staffs and Worcs canal, where she was based on the Hatherton Branch, outside E.Thomas' house. This was the last boat built by Ernest Thomas, and almost the last joey built (a few more were built at Ken Keay's dock on the Wyrley and Essington Canal, about a mile away). It is the only surviving joey with a day cabin, and may be the only surviving wooden joey still capable of floating.