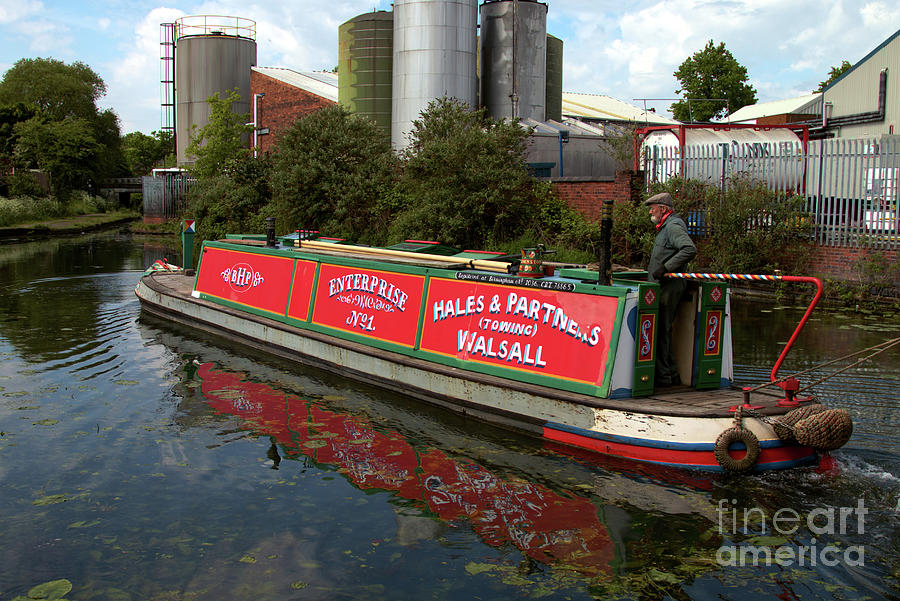 Work boat Enterprise No 1 approaching Black Country living Museum on a bright sunny afternoon in the U.K. ,
ENTERPRISE was number one of fourteen tugs run by "Ernie", who had over four hundred boats at the peak of the trade. By the late 1950s, Birchills power station began to receive supplies by rail and ENTERPRISE was laid up for increasing periods. She was virtually untouched for about ten years until 1973, when Ernest Thomas disposed of some of his notable boats including the tugs ENTERPRISE NO. 1 and BIRCHILLS NO. 2. ENTERPRISE was bought by her current owners who found that the hull sides were very thin in places, with a hole in the bows and a clay puddle covering a weak spot on the stern bottoms. The front deck was full of dry rot and the cabin cladding was disintegrating. Despite neglect, the Gardner engine still ran and everything else worked. However, after a prolonged period of rain she sank twice in the deepest part of the Cannock Extension canal. She was re-floated and moved to Peter Keay & Son's yard at Pratt's Bridge Dock for major repairs, which lasted almost four years. The fore, front and stern decks were completely removed together with the condemned two hundred gallon diesel tank and very worn elm bottoms from the front half. The wrought iron plates in the previously inaccessible areas were badly scaled. The thin areas were cut out and three by eight inch mild steel plates were hot formed to shape and welded in position. Both the fore-end and stern swim sections were repaired in this way, thus retaining their double curvature. The counter sides were replaced in mild steel, re-using the original guard irons. A weed hatch was made in the uxter-plate with a corresponding lift-out section in the new oak deck. Gunwales alongside the cabin were renewed by Jim Forrester in 1984 prior to replacement of the cabin sides which now incorporate a double skin. After over twenty years of use, the oak deck was replaced in 1998-1999 with more traditional ash boards on top of new structural keruing. New three inch thick elm bottom boards were fitted at the stern and in the fore-end. In place of the rotten keelson, one inch longitudinal shearing planks were used. Beneath the engine room the bottoms, although worn to two and a half inches, were so well pickled in oil etc. that they did not need replacing until 1991. Alan Williams (who rebuilt the Severn trow SPRY) performed this operation using elm and traditional ‘chalico’ sealant. The fore-end, front and counter decks were reconstructed between 2000 and 2004 replacing all the oak structure with keruing and the oak shearing with ash strips.

The partners acquired a wrought iron BCN day-boat in 1993 (built circa 1910) and named it BHP NO. 2, making it possible to perpetuate the tradition of tugs and towing. This aspiration has been realised on the occasion of the Boat Gatherings at the Black Country Living museum, and particularly in September 1999 when the tug was filmed for archive purposes pulling a train of three day boats loaded with coal from the surviving chutes at Anglesey Basin, Chasewater, to the Museum at Tipton. Another day-boat, BHP NO. 3, (a double ended 'joey') was added to the fleet in August 2001. ENTERPRISE travels many hundreds of miles each year (over nine hundred miles in 2000) and, with her three feet draught over the entire length, makes a major contribution by locating submerged obstacles and keeping the channel clear for others. She retains the internal machinery and external appearance from her time as the most powerful tug in Ernest Thomas’ fleet, with the exception of a nine foot extension of the cabin, added in 1974.