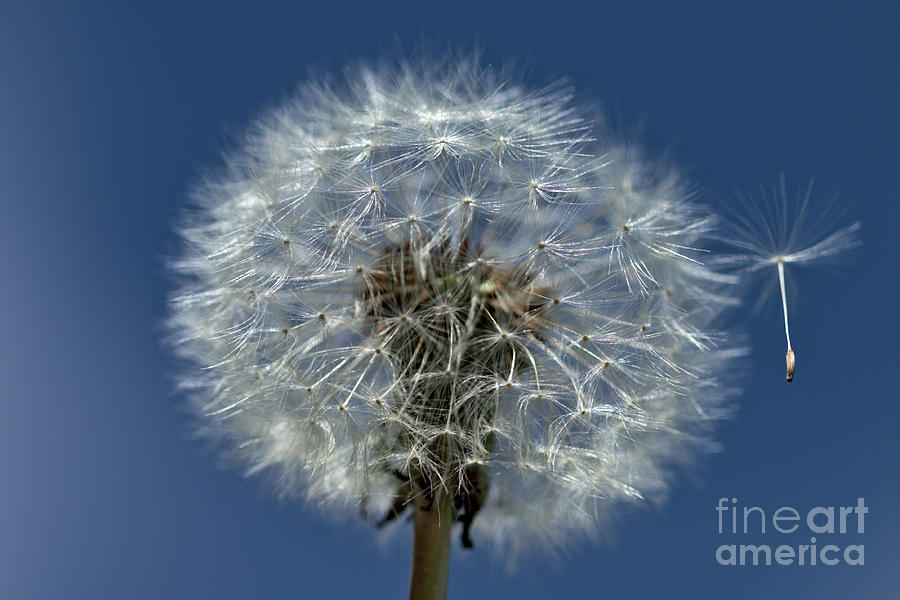 Taraxacum officinale, the common dandelion (often simply called "dandelion"), is a flowering herbaceous perennial plant of the family Asteraceae (Compositae).
It grows in temperate regions of the world, in lawns, on roadsides, on disturbed banks and shores of waterways, and other areas with moist soils. T. officinale is considered a weed, especially in lawns and along roadsides, but it is sometimes used as a medical herb and in food preparation. The common dandelion is well known for its yellow flower heads that turn into round balls of silver tufted fruits that disperse in the wind. These balls are usually called "clocks" in both British and American English. The name "blowball" has also been used.[

How perfect can this be?! Wow - great capture!! L/F

Congratulations on your feature in the Fine Art America Group "Images That Excite You!"

Love it with the one flying away!

Love that you captured the floating away of one of the seeds. Brings back memories of endless sunny days as a child picking these and launching a flotilla of magical travelers with one giant blow. Aloha

Fascinating to look at with that one little silver fruit breaking free! I love this! l/f/tw

Hi Stephen, I love everything about this image! Great title as well!

Hello Kathy thank you for you comments lady much appreciated