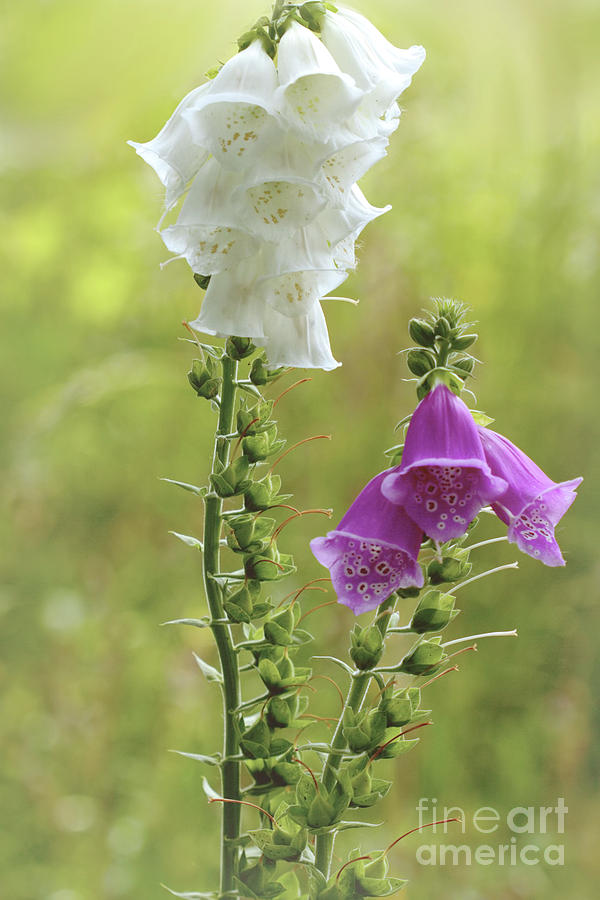 The scientific name means "finger-like" and refers to the ease with which a flower of Digitalis purpurea can be fitted over a human fingertip. The flowers are produced on a tall spike, are tubular, and vary in colour with species, from purple to pink, white, and yellow. The best-known species is the common foxglove, Digitalis purpurea. This biennial plant is often grown as an ornamental plant due to its vivid flowers which range in colour from various purple tints through various shades of light gray, and to purely white. The flowers can also possess various marks and spottings.A group of medicines extracted from foxglove plants are called digitalin. The use of D. purpurea extract containing cardiac glycosides for the treatment of heart conditions was first described in the English-speaking medical literature by William Withering, in 1785, which is considered the beginning of modern therapeutics. It is used to increase cardiac contractility (it is a positive inotrope) and as an antiarrhythmic agent to control the heart rate, particularly in the irregular (and often fast) atrial fibrillation. Digitalis is hence often prescribed for patients in atrial fibrillation, especially if they have been diagnosed with congestive heart failure

Just WOW! This is truly breath-taking!!

This is really beautiful, Stephen!!! Lovely composition and light!!! :)))vf

Much appreciated good fellow thank you

Appreciated Breena lady that is a lovely name by the way .

I can't get enough purples and greens! Stunning collection! LF

Stephen this is such a lovely capture!!! LF

Stephen, this is gorgeous. f/l

Just lovely Stephen! I just love an image that takes me there. I can imagine me taking a carefree stroll down a dirt path to a lovely little cottage, and seeing these foxgloves along the way. See now that's a great capture when that can do that for someone. The description is the icing on the cake. LV/FV Janet

Oh my Janet that is such a lovely sweet thing to say i too have certain fondness for a type of image but there are still images that just grab me and whisk me away think it s maybe only music and art that can do that to a person ,So glad it has taken yo to a special place lady appreciated your comment means a lot,