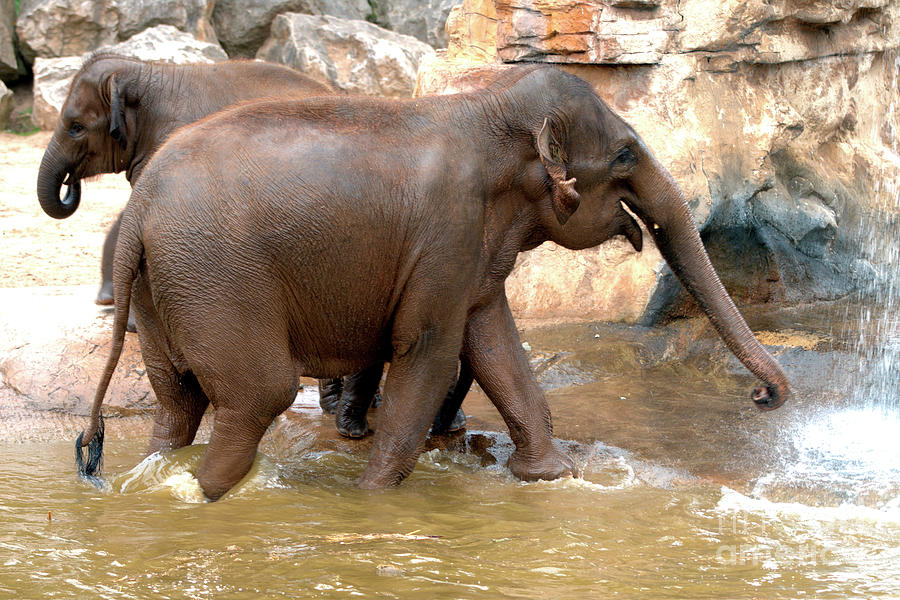 The Asian or Asiatic elephant (Elephas maximus) is the only living species of the genus Elephas and is distributed in Southeast Asia from India and Nepal in the west to Borneo in the east. In general, the Asian elephant is smaller than the African elephant and has the highest body point on the head. The back is convex or level. The ears are small with dorsal borders folded laterally. It has up to 20 pairs of ribs and 34 caudal vertebrae. The feet have more nail-like structures than those of African elephants—five on each forefoot, and four on each hind foot.The distinctive trunk is an elongation of the nose and upper lip combined; the nostrils are at its tip, which has a one finger-like process. The trunk contains as many as 60,000 muscles, which consist of longitudinal and radiating sets. Tusks serve to dig for water, salt, and rocks, to debark and uproot trees, as levers for maneuvering fallen trees and branches, for work, for display, for marking trees, as weapon for offense and defense, as trunk-rests, and as protection for the trunk. Skin colour is usually gray, and may be masked by soil because of dusting and wallowing.

wonderful composition and such joy comes through this image. Fabulous! lf

These elephants are having so much fun! Great capture, Stephen! L/F

Every creature seems to get a smile on their face when they are playing in water! Love this so much!.....fv

Love this, fabulous capture a fave

I have to agree lady appreciated

Is there anything cuter than a baby elephant! Excellent action capture, Stephen! l/f/t

No and i still love Dumbo