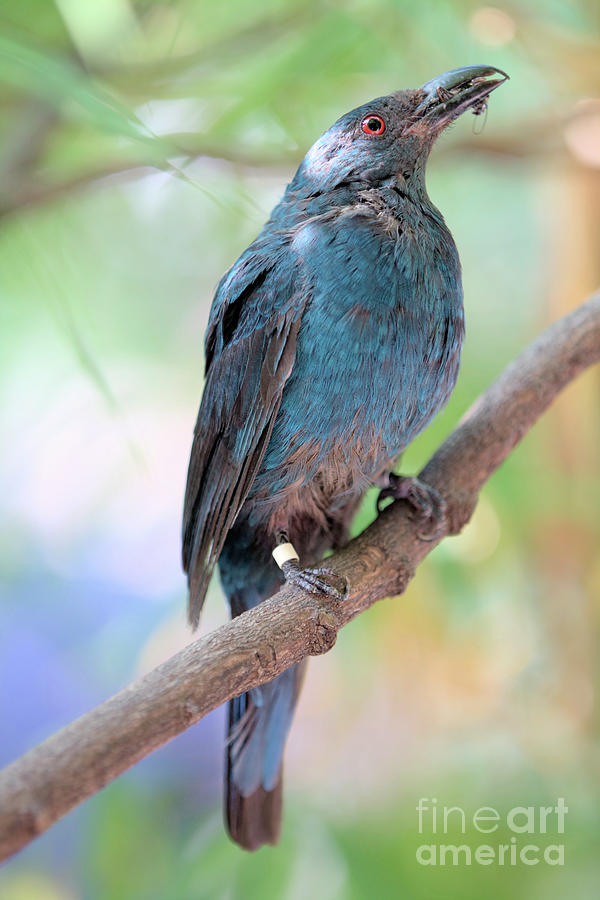 The Asian fairy bluebird measures 24 to 27 centimetres (9.4 to 10.6 in) in length. The iris is crimson and eyelids pinkish; the bill, legs and claws are black, and mouth a flesh- colour. Marked sexual dimorphism is evident. The male is a shining ultramarine-blue with lilac reflections on its upper plumage, lesser wing coverts, and under tail coverts, while the sides of its head and the whole lower plumage are deep black; greater wing-coverts, quills, and tail black, and some of the coverts tipped with blue, and the middle tail-feathers glossed with blue.

The upper plumage, the lesser wing coverts, and the lower tail coverts of the female are brownish blue, with the edges of the feathers brighter. The middle tail feathers and the outer webs of all the others, except the outer pair, like the upper plumage, and remainder of tail dark brown. primaries and secondaries dark brown. The greater wing coverts, primary coverts, and tertiaries dark brown, with a blue tinge on the outer webs. Sides of the head and whole lower plumage blue, very similar to the upper parts. The young resemble the female. The male changes into adult plumage in March, the change taking place without a moult. The feathers of the upper parts first become fringed with bright blue, then the tail coverts change, and finally the lower plumage changes. Young birds with the lower plumage mixed black and dull blue, and the upper plumage like that of the adult are frequently seen.

Incredible capture! Such a gorgeous bird!

This is so lovely! The background is amazing! Looks like he's got his mouth full of something!! Great capture, BOB! . . . .fv